Girl without a Pearl Earring

Johannes Vermeer’s Girl with a Pearl Earring is under a mysterious veil. This mystery has often been attributed to the unknown identity of the model and it seems that the question “who is she?” not only never becomes trite, but also elicits new answers and dimensions as the time passes by. 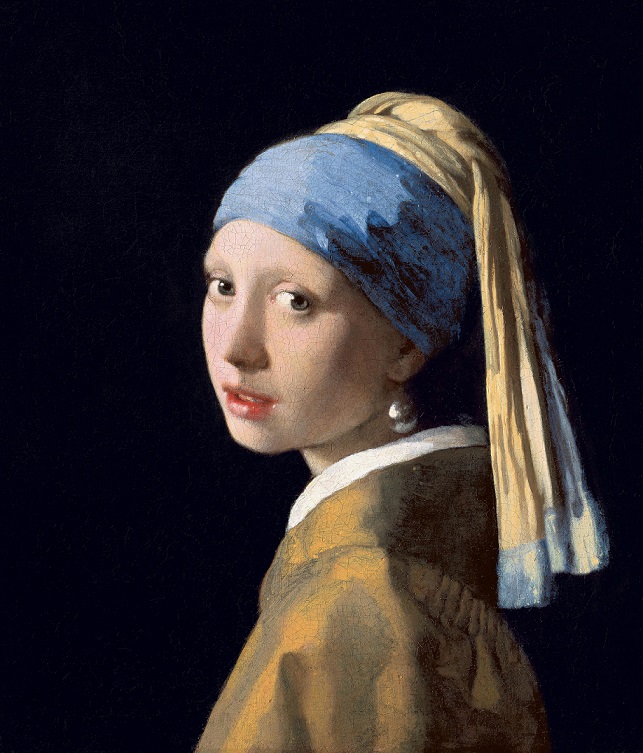 In this article I have attempted to suggest a new perspective for understanding this element of mystery: It is the result of the contradiction between the title of the tableau and the painting itself; an inconsistency which has turned this artwork into an unending battlefield of conflicting conjectures about the identity of its model. Let me explain it more: Without looking at the painting, what the title “Girl with a Pearl Earring” brings into our mind is an elegant, beautiful, wealthy girl who can afford wearing pearl earrings; however what the painting portrays is a modest girl whose mundane beauty has nothing to do with the oversized, bright pearl. Here, the pearl earring can be considered as a kind of logo, a sign, which has more than one signified: the signified of the word “pearl” in the title is the concept of wealth and luxury, but the signified of the image of pearl in the painting is the concept of something added, artificial, even borrowed (just as in the fiction of Tracy Chevalier, in which the pearl earring belongs to the Vermeer’s wife).

The binary opposition between the luxurious pearl and the modest girl has turned this painting into an arena of competing conjectures. Many have attempted to solve this incongruity by justifying the presence of this pearl. I mention two examples: many believe that this painting is a tronie, not a portrait, and the girl is wearing that exotic yellow and blue turban and the pearl earring for a study of head and shoulders. According to Dutch astrophysicist, Vincent Icke, the pearl earring is actually polished tin, regarding its size and specular reflection. The second example is Tracy Chevalier’s bestselling novel with the same title, in which class stratification is one of the main themes of the novel: Griet is a poor maid’s assistant who wears the pearl earring of Vermeer’s wife to pose as a model for his painting. Both of these examples are an attempt to normalize the inconsistency between the modest, mundane beauty of the girl and the luxury of the pearl.

Now I want to look at this contradiction from a different angle, and to suggest not an ideological solution but a tangible one. I think we can put an end to this opposition by recreating the painting without the pearl earring. This recreation (although clumsy) is my first attempt at oil painting. 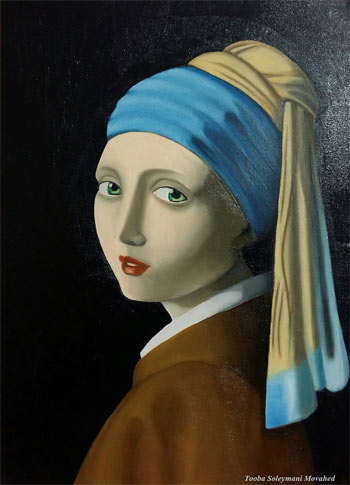 As you can see there is no pearl earring, indeed no earrings at all; however, when it comes to naming this imitation, the lack of logo comes to the surface again: “Girl without a Pearl Earring”.

The play of language relates the copy to the original. To put it another way, to emphasize the lack of pearl, the language mentions it again. It is as if the medium of language (here the title of the painting) cannot put an end to this battle of opposing poles.

The pearl earring, whether present or absent, has made the communication of girl’s deep eyes and open mouth problematic, and there is no way to escape it. This is what has turned this painting into an enigmatic mysterious work of art.

Although these suggestions and conjectures can allay the viewer’s curiosity temporarily, the enigma of the painting persists, as if our understanding of this painting will remain fragmented forever.

You can read my full article in http://drawingacademy.com/girl-without-a-pearl-earring

You can read my article in Russian language in  https://www.risunoc.com/2018/01/girl-without-a-pearl-earring.html